History (From brochure for Premier IPT 2002)

The following information was obtained from two articles published well before many of us were born. The one being the “GOLF ILLUSTRATED” an overseas magazine dated July 24, 1914, and the other being a local newspaper, “THE POTCHEFSTROOM HERALD” dated September 6, 1938.

The birth of the golf course is owed to the far-sightedness of the Assistant Resident Magistrate of Potchefstroom, Mr T G Macfie, who saw the possibilities of turning the swamp area surrounding the Mooi River, by drainage, into the Meadows which later developed into the golf course. This process was started in 1890 when the swamp areas between the east and south bridges were drained. This land was handed over to the Municipality and the new golf course was opened in March 1908 at a cost of £ 2 000. This was the first course under municipal control. 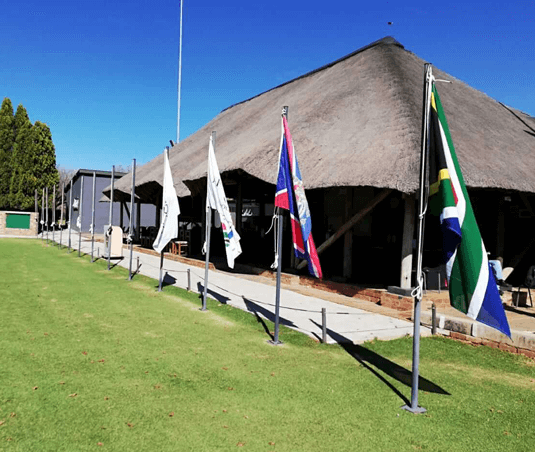 In 1909 the first of two (the second was played in 1912) South African Open Championships were played at Potchefstroom and was won by one John Fortheringham.

“Since the municipality took control of the course, tremendous improvements have been made. Last year hundreds of golfers were attracted from all parts of the country. The course is 18 holes, with a total length of 6 000 yards, and a bogey score of 77. It is scientifically bunkered in a manner best calculated to test the skill and temperament of the players. The winding course of the river affords many natural hazards which give scope to every class of iron shot, and the fine stretches of velvety fairway are a joy to the golfer who sets great store on his long game. With regard to the greens they are, taken as a whole, unsurpassed in this country….” (Golf Illustrated, July 24, 1914).

The Clubhouse was opened in 1938 and was a welcome addition to the course. In the same year the municipality decided to appoint a groundsman to the cost of £ 120 per year. In fact the whole budget for the course was £ 250 per year.

Many interesting tales exist, one being that a group of players, both amateurs and professionals, who at the close of the days play still had an hours daylight left, pooled £ 1 each and played a “hole” starting at the Clubhouse, across the fence at the tenth, up Lombard Street to the Royal Hotel where the winner was the player who “holed out” in the spittoon in the least number of shots. The winner did not get away with much of the stake as a celebration on a grand scale closed the proceedings.

The course has changed a number of times since then, hopefully for the better.

What People Say About Us

19th Hole. Relax & unwind the next shot is in the glass.
Eating is not cheating.

You can have your party, conference, wedding or any other event with us.
Be a guest at your own event.

We have 2 Bowling Greens, Business League & Social Activity. A beautiful lawn doesn’t happen by itself.

We have 4 Tennis Courts, Socials and Tennis Coaching. Serve it, Smash it, Win it, Love it.